DATA LAUNCHED ON THE LANDFILL SITUATION IN THE EU-28

EURELCO, in collaboration with i-Cleantech Flanders, has formally published an infographic combining new data on the landfill situation in the EU-28. Based on a bottom-up approach data were collected from several public bodies in Europe.

The headlines messages from this bottom-up inventory are: 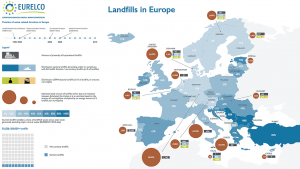