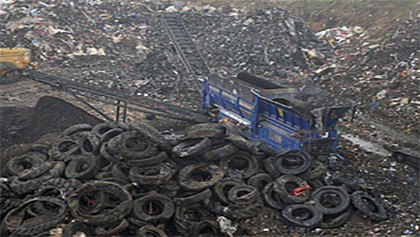 The total area chosen for excavation of the Gerringe landfill was approximately 6000 m2 with a capacity of 200 m3 per day. It did not consist of any biodegradable waste but instead contained waste suitable for combustion and recycling. Due to ongoing landfill gas production, the intention was to excavate in the maximum depth of 6 metres. Thus, it was of most importance not to excavate in biodegradable waste landfilled before 1987.

Excavated waste was separated in the following fractions:

The excavation was completed within 8 months. An agreement with an entrepreneur was concluded in which he would excavate for free and in return get all materials representing a positive value along with a fee of €14 per tonnes of combustible waste delivered for incineration.

The implementation of the LFM project entails more costs than revenues. The cost is rated at €67 per tonnes of waste excavated. The potential of waste for re-use was lower than expected (< 1%), the quality was poor and hard to sell with a profit, and the excavation, i.e. hauling and labour costs, was the most expensive part of the project.

The proceeds are defined as the value of the volume released when the waste is excavated and the costs per volume. It is calculated on the basis of the community’s costs as regards to the establishment of the operating landfill – it should essentially represent the true costs.

In 1973, the landfill was established with an aggregate area of 11.6 hectares. This results in a total landfill volume of 1,611,409 tonnes/m3. Deployment costs were approximately €80 per m2 in 1973. It is equivalent to approximately €6.5 million. Therefore, the value of the new landfill capacity is only €4/m3.

Some of the questions need clarification. For example, should collateral damage of this type of waste be paid? It is landfilled after 16 July 2009 and the new waste would actually contribute to an extension of the aftercare period in such a way that a need to extend the post closure care and monitoring is probable. In addition, does the landfilling comply with the legislation in the European Landfill Directive and the Council Decision?

Waste for energy and incineration.