Closure of the Kudjape municipal landfill on Saaremaa Island

CLOSURE OF THE KUDJAPE LANDFILL 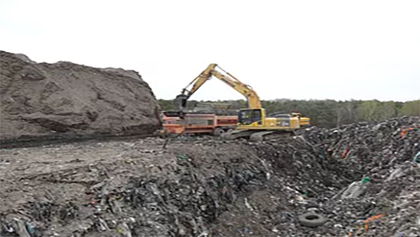 The Kudjape municipal landfill was an unlined landfill situated on Saaremaa Island. The groundwater sampling network and gas monitoring wells provided some background data. In a closure project, a thick layer of cover material was required. As the landfill is situated on an island with thin soil cover, no cover material was available with acceptable financial or environmental cost. From this point, an idea of Landfill Mining was born with main focus on excavating cover material. The cover material was planned to act as a methane degradation cover.

Excavations started in August 2012. During the next 10 months, 55 000 m3 were sieved through 40 mm trommel screen. Coarse to fine ratio was 2:1. In total 27,600 m3 of cover material (mix of fine fraction, mineral soil and aged sludge compost) was used. Some of coarse fraction was incinerated in mass-burn facility, and cement industry. Waste-to oil and landfill plastic-to-product were tested.

The ultimate goal was to cover a previous closed municipal dumpsite. Cover material had to be excavated and sieved from the new part of the landfill. Fine fraction was used as a material for methane degradation layer on new section. Coarse fraction was a subject for testing as waste fuel, but also in waste-to-energy, waste-to oil, and landfill-plastic-to-product. Finally, the landfill site was designed to serve as a public recreational area

The excavated area was 1.22 ha.. In general: coarse fine ratio was 2:1. Fine fraction was modified to serve as a methane oxidation layer (fine fraction+minaral soil+aged sludge compost). In total 27,600 m3 of cover material was used.